CINEMA: A PUBLIC AFFAIR is a film about the power of cinema. Set in contemporary Moscow, it illuminates the work of Naum Kleiman, former director of the Moscow Film Museum (Musey Kino), Eisenstein expert and film historian.

The Musey Kino in Moscow was founded by the renown film historian Naum Kleiman in 1989. The institution was of enormous importance in Moscow during the Glasnost years and for a new generation of Russian filmmakers. In 2005, the Musey Kino was evicted on spurious grounds and has existed only as an archive since. Director Naum Kleiman and his staff have been struggling to find a new location. Indefatigable, they have been keeping the “Cinema in Exile” alive by organizing almost daily screenings in cinemas and museums across Moscow. In October 2014, the Russian Minister of Culture replaced Kleiman with a pro-government Director, putting an end to the Musey Kino as a forum for cinema and free expression.

I lived in Moscow from 2009 until 2014. I’m half Russian, half German. As a filmmaker, I’m surrounded by friends and colleagues who are involved in film. But never have I met people for whom film means so much as the Muscovites who are fighting for the survival of the Musey Kino. For Naum Kleiman and his colleagues, cinema is a path to personal growth and democracy. Their commitment continues to amaze me.

The mood among my friends in Moscow is increasingly one of fear. To take a position against the government is to risk one’s job. Many would like to leave the country.

I know from my own family’s experience what it means to live in a totalitarian system, how fear infiltrates one’s daily life and becomes a reason to emigrate.

Naum Kleiman has known repressive regimes all his life. Although emigration would have been possible, he opted to stay. Fear for him is not an option. He responds to the current situation with courage and equanimity. His supporters are of all ages and professions. Some are renowned prize-winning directors for whom the Musey Kino has played a formative role. Some have nothing to do with filmmaking. What unites them is their belief in cinema’s existential significance.

The digital revolution has changed filmmaking and film viewing the world over. Anyone can make a film with his mobile phone. And anyone can watch a film at home. While in the West, there are still cinematheques where people come together to watch films, fewer and fewer people opt to do so.

My film tells the story of people who have lost their forum for film, although they live in a country that has one of the richest cinematic traditions in the world.

They can no longer come together to discover and discuss “their” films or foreign films. In its absence, the true significance of the place becomes apparent. The Musey Kino was a place of freedom.

For Naum Kleiman this is the issue: the right to freedom. He has experienced discrimination and deportation. Cinema for him has always played a central role in the fight against fear.

Listening to Naum Kleiman is empowering. 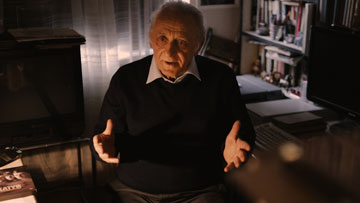