Interview with the Director

INTERVIEW WITH THE DIRECTOR

Do you remember the first film you saw at the Musey Kino? What does the place mean for you personally?

When I was studying in Paris, New York and Munich, cinematheques were my home. I’ve had wonderful experiences with films and people. Because I grew up in the West in a family of Russian exiles, Russian film was always very important to me. But it was a part of Russian and Soviet culture that was hard to access from the West. I was always looking for contemporary Russian films. I heard about the Musey Kino from friends. I always wanted to visit it but in the ’90s I was living in Germany. I followed the scandal of its eviction in the press.

When I moved to Moscow in 2009, the Musey Kino had lost its home. The first film I saw there was Eisensteins “The General Line”. The screening took place in the so-called cultural centre “Mossoviet” in a pretty barren part of north Moscow. It was a huge, somewhat dilapidated building that had housed a spectacular cinema in Soviet times. Now tango and judo courses are taught there. The screening took place in a tiny room. On the other side of the wall, tango was being danced. There were about 15 people in the audience. The place depressed me. Naum Kleiman introduced the film. He spoke with such passion, intelligence and humor that I forgot about the tango music and the shabby location. Until then, I had found “The General Line” – which I had seen at some point in a seminar – hard to understand. But through Kleiman’s insights, it became an energized, experimental, inspiring film.

How did you get to know Naum Kleiman?

Friends had told me a lot about him and I wanted to meet him. My husband worked with him. One evening we visited him in Eisenstein’s apartment, which is completely hidden in central Moscow. Naum Kleiman has a particular way of getting to know people. I felt completely at home with him. We had tea in Eisenstein’s living room and he told wonderful stories – it was a relationship that I wanted to maintain.

Many see Eisenstein as a Soviet propagandist or as part of a history long past, as a has-been. People who aren’t interested in film have no idea that Eisenstein’s apartment is in the middle of Moscow, nobody’s interested. What people don’t realize is that the Soviet aesthetics of that era, Eisenstein’s films, Rodchenko’s photos continue to influence media. Advertising design, particularly in Russia, still uses the kind of pictorial composition that Eisenstein invented – and of course his montage technique.

When did you have the idea to make a documentary about the film museum?

Cinematheques around the world invite Naum Kleiman to visit – in Moscow nobody wants him. People should be lining up in front of Eisenstein’s apartment, but nobody is interested. I can hardly believe it. Which is why I wanted to make this film.

CINEMA: A PUBLIC AFFAIR seems to be a portrait of contemporary Russian society. But where are the nuances between good and evil, the hopes for Russian society?

First of all, the film isn’t about good and evil. It’s about a man’s vision and his world. The people who work in the museum, from the outside, don’t seem to be anything special. They’re not interested in marketing themselves. They are working on something they believe in, they don’t make a big deal of it. For me they’re heroes. There are a lot of people like that in Russia – smart, engaged in a very quiet way. For me they are the hope of Russian society.

How do you view the cultural changes that have taken place since 1989, that Naum Kleiman and many of the characters in this film have also experienced?

My own experience is limited because I was living in Germany at the time and I experienced the changes in Russia only as a visitor. It was a time of terror, of hardship but also of hope. At the same time there was an explosion of creative freedom. Everything seemed possible. To this day, this transitional period is seen with great ambivalence by many Russians.

What’s the situation of the film museum, the Sergej Eisenstein collection and Naum Kleiman today?

His staff are still being fired, the process is not yet over. In November, the European Academy of Film declared Eisenstein’s apartment to be a historic landmark. But that doesn’t really achieve much. Naum Kleiman is now trying to establish an international Eisenstein Centre. We’ll see if it works. There’s a lot of resistance. I’m hoping that a cinephile oligarch will donate a building in central Moscow for the purpose.

CINEMA: A PUBLIC AFFAIR was produced without a distributor, broadcaster and little grants. How did you manage to make it?

I started researching the film in 2009. The project got some development support. My producer Katrin Springer and I did everything possible to get some production funding, but we were turned down everywhere. At the same time, the political situation in Moscow was getting more tense. Naum Kleiman’s work and the Musey Kino were ever more under threat. We decided to try to make the film on a minimal budget. Because I have a camera and editing equipment, this was possible. From 2011 through 2014, I was shooting alone but with the support of cameraman Martin Farkas, who came to Moscow on several occasions.

Does Naum Kleiman’s Jewishness play a role in your conversations or in his work?

Naum Kleiman remains an optimist. Where does this come from?

I’m hoping that’s the question that audiences are left with. The answer may be less important than the question itself. 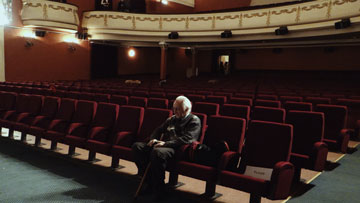