The Eisenstein apartment was the starting point for the Cinema Museum.

During her lifetime she had already given a great amount of the huge archive – manuscripts, drawings, photos and documents – into the hands of the Russian State Archive of Literature and Art (TsGALI, today the RGALI). The library, furniture and personal belongings all stayed in the apartment of Pera Atasheva on Smolenskaya Street.

The apartment itself was consigned to the Soviet Association of Cinematographers by Moscow authorities after her death.

The association founded a managing commission for the heritage of S. M. Eisenstein, which was led by the director Sergey Yutkevitch, as well as a museums commission to develop a concept for a film museum and the construction for a cinema centre.

In the following decades the Eisenstein apartment came to be a place for many-faceted activities.

Eisenstein’s works were prepared for publication/release and exhibition concepts were developed for various museums all around the world. Filmmakers of all generations, as well as researchers from distinct disciplines and students from all art movements met here; prominent visitor’s found their way to Moscow.

Some possessions and books were lost during the house moving – 1948 from Eisenstein’s apartment on Potylicha Street into the prerevolutionary Moscow house of Pera Atacheva on Gogel Boulevard and 1962 into their apartment on Smolenskaya Street.

Nevertheless, the majority of the asset did survive. Co-workers and friends of S. M. Eisenstein certified that the widow succeeded in maintaining the spirit of the master’s house.

The apartment as a whole has become a cultural heritage of exceptional importance for Russia and the whole world. It is unique in terms of authenticity and its power of expression.

The major part of the collection is the library. It contains more than 4000 books in five different languages with handwritten comments by Eisenstein. Among them are precious first editions as well as rare editions in Russia, books with personal dedications, original material and sources for movies, theoretical research works and lectures from Sergey Eisenstein. No less important for the understanding of his work and the personality of the director is his art collection:

Here the “fine delicate sense for the whole world” finds its expression as Dostoevsky defines it as an existential feature of the Russian culture in his lecture about Pushkin in 1880.

From Eisenstein’s earlier periods of life in Riga and St. Petersburg dishware, the round oak table with five chairs, a vitrine and the chandelier have survived.

The contemporary part of the library consists of publications on Eisenstein as well as various editions of his oeuvre.

Vera Rumyantseva, Curator of the Eisenstein-Archive 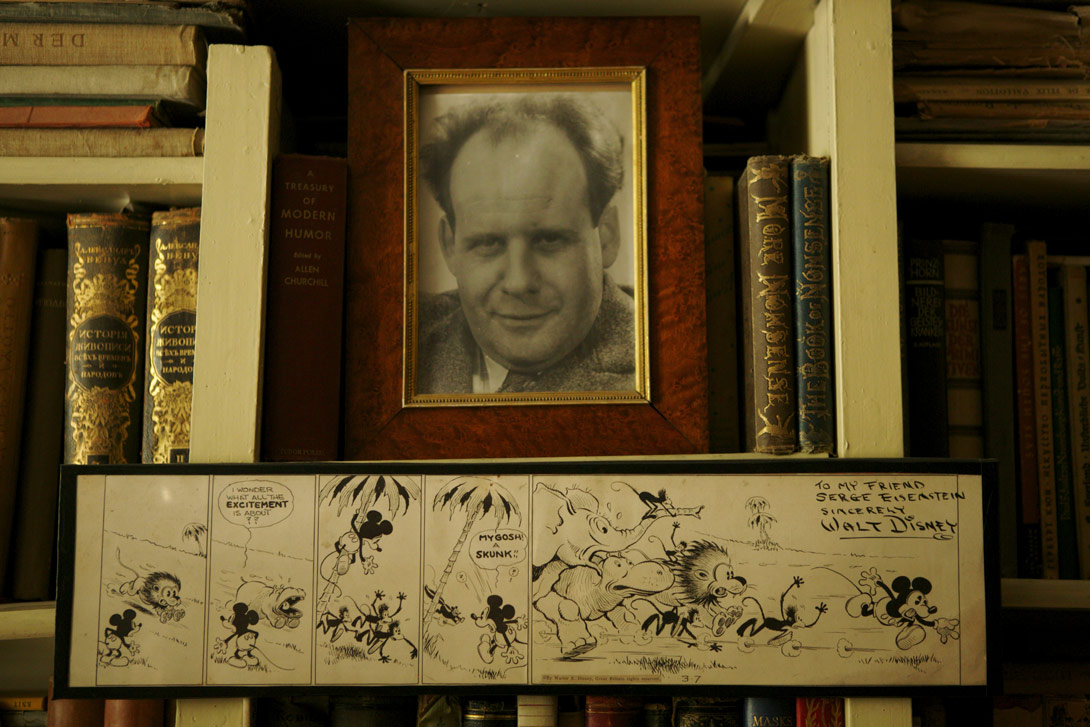